These Halloween candy dog toys are a real squeak treat. Made with 2 squeakers, crazy crinkle., and super soft fuzz, this dynamic duo is perfect for multi-dog homes or particularly playful, small pups. Bite-N-Switch is everything you love about the classic Halloween candy without any of the weird tastes and textures! Perfect Size for my Small Pup

My puppy is only 10 pounds, and sometimes finding small enough toys for her is hard. These are 2 perfect size toys for one! Awesome! Great for a short busy time 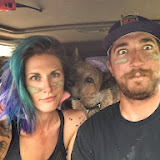 It's the little things

So even though within about a week these were gutted (it probably would have been sooner had I not also given my dogs 8 other toys at the same time), they still somehow evade the trash can for being floppy husks of expired candy. They sit at the bottom of the toy basket until it's upended and then they are flung around the house carelessly at least one day a week. They've been buried in the backyard, dropped in the water bowl, peed on (and washed every time), and lost and found countless times in about two months, but they keep being brought back to life by my dogs. They'll be going the way of all the other toy skins once I get my next BarkBox, but they've been an unexpected bit of fun while they lasted! For the record, the crinkly black piece lasted longer and put up with more squeaking.

Best for the mild unholy terrors in your dog pack. Well made but not for the "Jaws" style chewers.